My Blind Spot works with Aira on creating inclusive digital platforms, has partnered with Intuit for the past 7 years improving the usability of QuickBooks and is forging a budding partnership with Two Blind Brothers! As Intuit continues to introduce usability and functionality into their QuickBooks Online platform, knowing that Aira is available as a work around for professionals who happen to be blind like the Manning’s is wonderful. But everyone should know that through our partnership with Intuit, QuickBooks for Windows is the most accessible, usable and functional software program offered by Intuit. We still have minor tweaks to make to the platform, but have a set of JAWS scripts that allow business owners, accountants and bookkeepers to use the QuickBooks as seamlessly as their non-disabled peers.

We are proud to be working and partnering with Aira, Intuit and the Mannings on promoting Ability that now has a vision on fashion!

It was fortunate that Bryan Manning’s girlfriend was around the day he and his brother Bradford started buying fabric. They had just ordered the material they’d chosen for their shirts in black and had moved on to navy, when the girlfriend pointed out that the swatch they were looking at also was black. “We almost double-ordered because we could not distinguish between the two colors,” Bryan says.

At age 7, the Manning brothers were found to have a retinal disorder called Stargardt Disease that attacks the center of the eye while leaving peripheral vision largely clear. Bryan describes the experience as wearing a pair of glasses with Vaseline smeared across the middle of each lens. Their disability compounded the challenge of launching Two Blind Brothers, a New York City-based apparel manufacturer that donates all net profits to retinal research. (The company has donated $200,000 since its 2016 launch.)

“It’s things like, is the label on this shirt correct? Are the notecards we put in the boxes correct? Is the bank statement we got in the mail correct?” Bradford says. “Those details are the toughest thing for us.”

About 18 months ago, the Mannings started using Aira, a tool that connects blind and low-vision people to human agents who survey their surroundings through smart glasses or smartphone cameras. The agents can read aloud users’ mail or describe the people in a room, hail them Ubers, or help them navigate a conference center. Twenty airports deploy the system for vision-impaired travelers. Several universities and retailers, such as Wegman’s, also use it.

Starting this week the financial software company Intuit is making Aira available for free to all entrepreneurs and small-business owners. “We wanted to go big,” says Ted Drake, the accessibility leader at Intuit. “If we can help a blind or low-vision entrepreneur build their business or start a new one, then hopefully that will lead to a lower unemployment rate and better jobs and lives for a lot of people.” 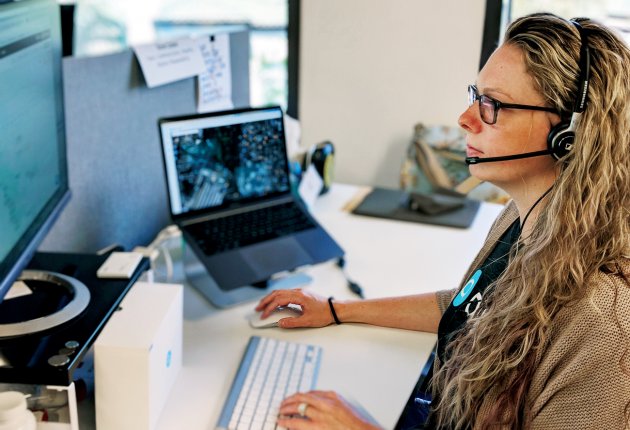 A hard job made harder

The unemployment rate for the visually impaired hovers around 70 percent, according to the National Federation for the Blind. For many who can’t find jobs, self-employment or entrepreneurship is the best option. Aira enables them to deal with inaccessible technology, like banking websites and point-of-sale systems. With permission it can also deploy software to connect directly with users’ computers. That assistance may translate into lower headcount and a healthier bottom line. “If you can’t perform a function yourself, you have to hire someone else to do it,” says Colleen Wunderlich, director of employment and entrepreneurship at Hadley Institute for the Blind and Visually Impaired, in Winnetka, Illinois.

The Manning brothers, who employ six people and manufacture through Lighthouse of the Blind, in Dallas, use Aira chiefly to read mail and other documents, to summon rides, and occasionally to read slides or narrate visuals in presentations. Although they use other hacks–such as zooming in on text with their iPhones–they like Aira “because there is a human on the other end,” says Bradford. “A lot of tools feel like they put distance between you and the people around you.”

In meetings, the brothers will often put their phones on speaker and summon an Aira agent for all to hear. “I will say, ‘Susie, can you describe the room to me?’ and she will make some comments about a shirt someone is wearing,” Bradford says. “It is a great icebreaker.”

“OnStar for the blind”

Suman Kanuganti, an Indian-born engineer with master’s degrees in robotics and business, launched Aira in 2015 after befriending a man who had lost his vision at age 33. Hoping to create a kind of “OnStar for the blind,” Kanuganti developed camera-equipped smart glasses that connect to virtual dashboards, allowing human agents to view and describe a user’s environment. Agents typically respond to a summons in less than 10 seconds and assist for the duration of discrete tasks.

The Intuit program pays for work-related minutes used by Aira subscribers who have the glasses. It also picks up the cost for non-subscribers who forgo the glasses and simply point their phones at what they want to “see.”

“They can use it for anything, from uploading their receipts to an accounting system to setting up an entire brick and mortar shop,” says Kanuganti, who estimates the average session will be around 10 minutes.

“As a founder myself I understand the number of things an entrepreneur has to do,” Kanuganti says. “With this program we are knocking down a wall for blind small business owners to manage their own companies.

Read the original article on Inc.com